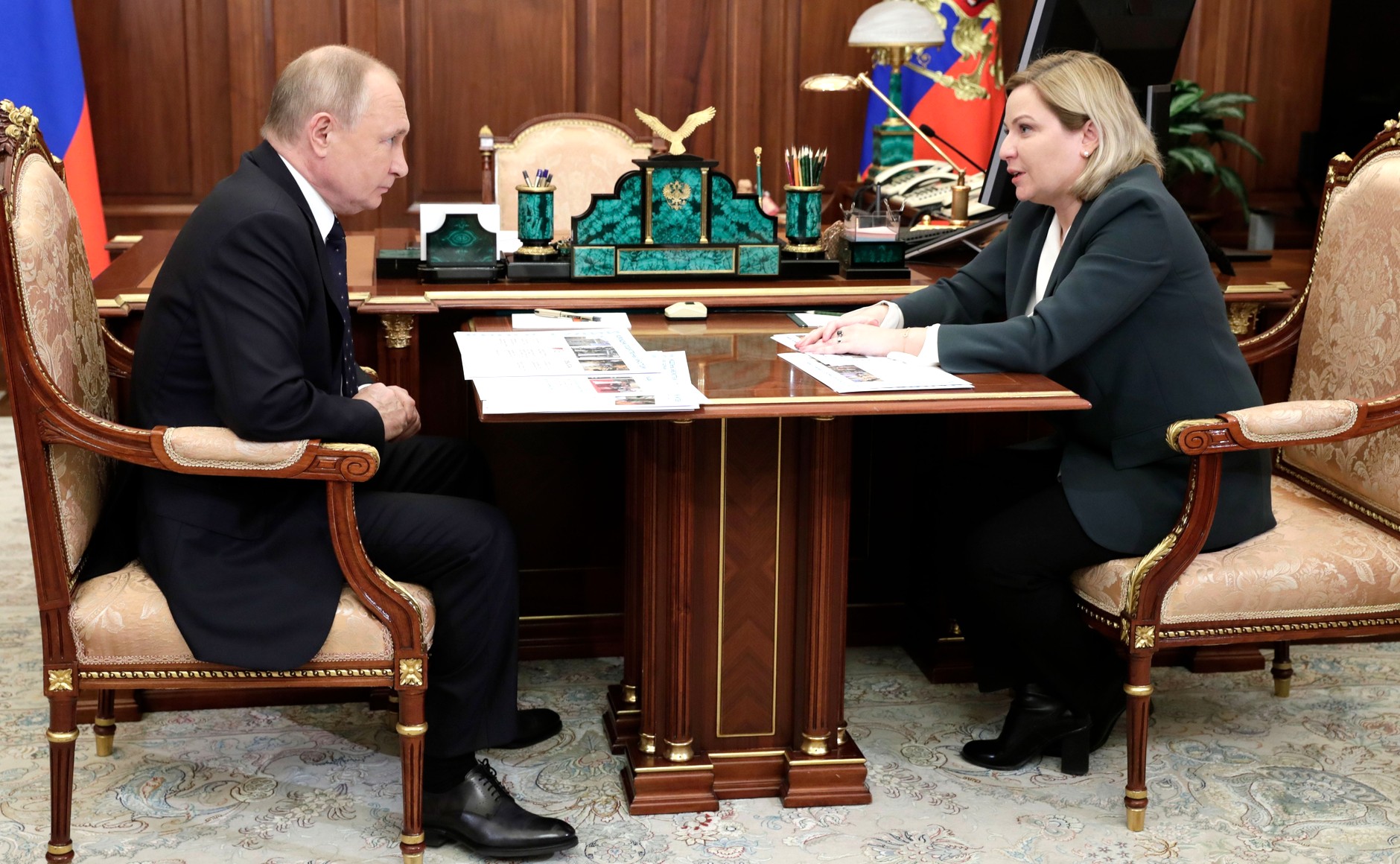 Olga Lyubimova told the President about the progress of the Culture national project and the Pushkin Card programme. She also talked about the development of domestic restoration schools, a nationwide plan for guest performances and music competitions held in Russia.

Shall we begin with the restoration of cultural landmarks?

Minister of Culture Olga Lyubimova: Certainly. This is one of our most important and difficult areas because it was in crisis for many years. We are working in restoration not only with cultural landmarks but also with film at Gosfilmofond (State Film Archive).

We are short of specialists who can restore musical instruments, and we do have unique violins by Guarneri, Amati and Stradivari. Fantastic performers play these violins. We are starting from scratch to train these specialists at the Gnessin State Musical College. We want to acquire masters will be able to restore musical instruments here, in Russia, so that we do not have to take them to Cremona every time.

Of course, there are also museum pieces. We are very happy to see that this work is in full swing at the State Historical Museum.

A separate area is the revival of the Leningrad restoration school in Peterhof and at Tsarskoye Selo. We are establishing large centres of competence in different areas of restoration. Our cooperation with them is good and smooth in both design and appraisal.

Plus, I must say that we have acquired a whole army of volunteers that are helping us. We can see how well they work in reserve museums, helping specialists conserve buildings that we are planning to restore later.

Another area of our activity that I would like to describe is our nationwide plan of guest performances. There was a tradition in the Soviet Union to draft a national programme for guest performances. We have revived this at Rosconcert. Obviously, most companies are doing guest performances – in Moscow, St Petersburg, Nizhny Novgorod and Crimea, especially in the summer. Of course, this is a big area – 85 regions for 32 national companies. These photos show how the Lezginka dance company performs in Chelyabinsk or the Pyatnisky Choir in Blagoveshchensk. This is a very important tradition that we have always had and, of course, the public reaction to these performances is incredible.

I will talk about the Pushkin Card a bit later.

We understand of course that young people who live in different regions and municipalities should be able to see groups of different levels.

Regarding our performers again, I would like to thank you very much for the start of the biggest Rachmaninoff competition timed to his 150th birthday. You know, it reminds us of the summer and winter Olympics. Since 1958, we have held the Tchaikovsky competition once every four years. We feel this is too rare. Now we have an interval of two years [with the Rachmaninoff competition].

Valery Gergiev and Denis Matsuev are there, involving their younger colleagues: 500 participants, 35 countries and three categories in which Sergei Rachmaninoff was so renowned – piano, conducting and of course composition. Indeed, there is very little talk about young modern composers. And as a result, we will see unique young performers. First of all, they will perform more together with the Mariinsky Theatre, with Novaya Rossiya [the New Russia], and with the Svetlanov [State Academic Symphony] Orchestra.

And applications. Since the Tchaikovsky competition is highly respected in the world… the newly established Rachmaninoff competition will give them a start, an opportunity to prove their worth more often than once every four years.

Now, regarding our Culture national project. We are in our third year on this project. In addition to the box office performances, it is very important for us to report that our well-coordinated work with the regions really produces golden projects. We do not have any projects that the governors have to be persuaded to work with. I am referring to cultural centres, to children’s art schools, children’s theatres, cinemas, and virtual concert halls. Car clubs literally saved us during the pandemic by giving us a chance to come and let people enjoy an open-air holiday.

And new musical instruments, of course, 38,000 of them. We know that teachers have worked at children’s art schools for years and nothing has ever changed, and suddenly it is such a big day.

Vladimir Putin: I have seen how people react to this.

Olga Lyubimova: I would like to tell you specifically about two projects. Model libraries are one of our outstanding and favourite achievements. We are telling you today that 611 libraries have been established in Russia, and 142 libraries have been established by the regions themselves, because they saw how people reacted. They are such powerful places; we are attracting all the young people there – they attend extracurricular activities and classes. We want to add classes in Russian language and literacy, something that is sorely lacking.

Local history and lore museums are a new project for us. We have allocated the funds following your Address to the Federal Assembly. Even now, as you can see, 73 regions and 434 museums immediately joined this initiative. It would certainly be a good idea to reformat them, to make them more advanced, so that in addition to the “know, love and respect your land” message, they would use multimedia – children would enjoy that and people who have been working there for years would enjoy it too.

I would like to tell you about our filmmakers. This is a very young industry. These young people have been working with us since 2006, and their works have enjoyed incredible success [at festivals] in Cannes, and in Venice, Beijing, Jerusalem, San Sebastian, Locarno, and Rotterdam.

I am referring to young teams of producers who have grown and learned to defend their right to represent national cinema in the international arena – as has always been the case with Tarkovsky, Konchalovsky, Nikita Mikhalkov… and now it is very important, it is difficult for them, geopolitically, they have to fight, just like our athletes, and they win fair and square due to the quality of what they do and participate in all conferences. This is on the one hand.

On the other hand, I can tell you about our achievements on large international internet platforms. Festivals present independent films whereas here we can release blockbusters and thanks to “digital” we can see the therapeutic effect a film can have.

The film Silver Skates was released and is at the top in Mexico and all over Latin America. People write and say they want the pandemic to end so they can go to St Petersburg in the winter. They want to see this city because it is beautifully filmed. The film is set in the beginning of the 20th century before the 1905 [revolution] and shows the city’s beautiful carnivals, traditions and the great palaces in St Petersburg. And, importantly, cinema promotes tourism as a kind of soft power.

Vladimir Putin: A sort of synergy.

And we feel very proud of our studios.

Vladimir Putin: How are things with Lenfilm Studios?

Olga Lyubimova: The situation with Lenfilm is getting increasingly better. Really. And we, actually not us, but the team working there, is doing a lot of work.

We have support for three new films, our “golden collection” is back at Lenfilm Studios, which will help it. We have brought all the masters together. We are generally set to use it as a single space where young people can come, get additional education and watch films.

Vladimir Putin: What about the financial side of the issue –debt, etc.?

Olga Lyubimova: The non-core assets have been sold off. Now we have funds to restore the studio, bring it to order and renovate it. Its sound stages are all leased till the end of the year, and Russian film producers are queuing up for more.

Vladimir Putin: Is everything functioning all right?

Olga Lyubimova: Everything is functioning, the work is going well. There is a competition for the sound stages. I get phone calls from producers who ask about getting involved in this.

And briefly, the situation is the same at Gorky Studios and Sverdlovsk Studios where we are reviving Ural Cinema. The people who gained recognition and appreciation in Moscow are going back home as big-name filmmakers and will work to bring Ural Cinema back to life.

Vladimir Putin: What about Gorky Studios as the studio that makes films for children and young people?

Olga Lyubimova: Gorky Studios have also gained support, we have four new projects. We are also steadily renovating all the sound stages since they are all operating to capacity. We are trying to use it more for film production than TV. In addition, we have a children’s school there with VGIK [the National State Gerasimov Institute of Cinematography] nearby, and we also have filmmaking classes for students there.

Vladimir Putin: What about the Pushkin Card. Does it work?

We are working hard with the expert councils that the regions proposed, and we also review it at the federal expert council level because the card must have an educational and enlightening component.

Vladimir Putin: Do people visit mostly their regional culture facilities or do they move around?

Olga Lyubimova: They manage to do it during holidays. I reported that the first ticket to a show at the Moscow Academic Theatre of Satire was bought by a girl from Siberia. Obviously, she came with her family to see it.